At the end of March I went to Bengaluru (Bangalore) for a two-day training with some 26 new pastors. Missionary Matthew Ude flew into Bengaluru the evening after the first day, returning from his furlough in the States, and taught the second day of the meeting.

These pastors have been gathering in Bengaluru each month for several months now to see if they agree with what we and the Bible teach so that they can join the Berea Evangelical Lutheran Church (BELC) in fellowship. We have been going through My Church and Others byJohn Theodore Mueller.

As we drove back to Chennai (our home base), we stopped and taught in three other districts along the way: 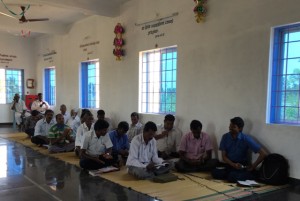 Here 44 pastors attended. This is an “older” district and these pastors are part of the BELC. It was an honor to encourage them with God’s word.

After teaching we drove to the next district, Ambur. The hotel at which we would have stayed was under renovation, so we tried 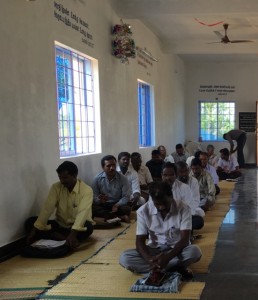 to get rooms at another hotel in Ambur. That hotel was all booked up (probably because the other hotel was under renovation). We could have gone back to the first hotel, but their restaurant was closed due to the renovations and there was no other nearby restaurant (at least not one that was proven “safe” for us foreigners), so we decided to drive the hour or so and stay in the next district, Vellore. We would have to drive back to Ambur in the morning for the meeting there, but better safe than hungry (or sick).

Amur is also a new district. We are using Luther’s Small Catechism as a framework to go through the teachings of the Bible to determine if we are in doctrinal agreement. We meet in a room in the top of a hotel lined with 4 cots. The room was full with the 15 men who attended.

Missionary Matthew Ude told me that on a previous visit he was sitting outside the room on the flat roof (deck) while the other missionary (I don’t know if it was Ed Starkey or David Koenig) was teaching.  He had put the sealed bottle of Coca Cola that the men in Ambur had given him down on the cement next to his chair. After a bit, a monkey ran up, stole the bottle, and then proceeded to chewed off the top to get to the Coke! Hopefully the caffeine didn’t keep the monkey up too late that night (or make him too rowdy)!

Vellore is also a new district where the 35 pastors are coming to hear what we and the Bible teach to see if they agree and can join the BELC in fellowship. I taught a lesson justification, focusing on how God has declared the whole world “not guilty” because of Jesus’ death and resurrection (2 Corinthians 5:19, Romans 5:18-19, Romans 3:23-25). This declaration was accomplished almost 2000 years ago and is freely given to you through faith in Jesus.

What a blessing and honor it was to meet with and share God’s word with these 120 pastors! Please pray for them as they minister and spread the Gospel here in India.