I really like India! When I first arrived, I felt like I was home. Since my arrival, however, a number of things have dampened that feeling.

When you check into a hotel, you have to fill out a form giving your passport information, date you arrived in India, purpose of your visit, and other personal information. The hotel also is required to make a copy of your passport and visa. This information is submitted to government/police so they are aware of your movements. At one hotel, a policeman came by on the last day of our stay to enquire about our exact purpose and to get a letter detailing our itinerary.

As I am obviously not of Indian descent, I am frequently asked “Why are you here?” This question must be wisely and discreetly answered to avoid any problems (Matthew 10:16-18).

There are more and more news reports of persecution and violence against Christians in India. If native Christians are facing such things, what can I expect as a foreigner without (many) legal rights? None of the Christians in our affiliated churches have experience such violence so far. Please pray that this will continue to be true.

All these things add up to make me feel less “at home” and less welcome. But is that a bad thing?

Neither India nor the US is really my home:

But our citizenship is in heaven, and from it we await a Savior, the Lord Jesus Christ, who will transform our lowly body to be like his glorious body, by the power that enables him even to subject all things to himself. Philippians 3:20-21

We are really foreigners in this world. We should not get too comfortable or feel too at home here. We were created for a far better and eternal home with God.

Let us be like the “heroes of faith” in Hebrews 11:12-15 and seek the kingdom God has prepared for us:

These all died in faith, not having received the things promised, but having seen them and greeted them from afar, and having acknowledged that they were strangers and exiles on the earth. For people who speak thus make it clear that they are seeking a homeland. If they had been thinking of that land from which they had gone out, they would have had opportunity to return. But as it is, they desire a better country, that is, a heavenly one. Therefore God is not ashamed to be called their God, for he has prepared for them a city.

Through Jesus’ death to pay for our sins and His resurrection from the dead, we now have an eternal inheritance that can never fade away:

Blessed be the God and Father of our Lord Jesus Christ! According to his great mercy, he has caused us to be born again to a living hope through the resurrection of Jesus Christ from the dead, to an inheritance that is imperishable, undefiled, and unfading, kept in heaven for you… 1 Peter 1:3-4

The election count is over; it is now safe to move around the state.  Jayalathaa, the incumbent, bucked a 32-year-old trend where the incumbent is replaced every 5 years (usually to return in the next election) and won a consecutive second term.

When I left for the pastoral training in the Puttur district yesterday, I noticed that my apartment building’s security guard had one of her fans. It has her face on it and campaign messages on the box. 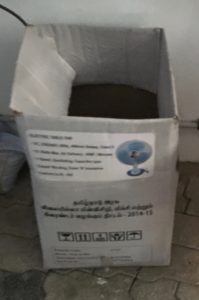 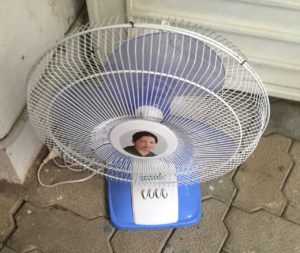 BTW almost a week after the elections, Martin, my Telugu tutor, still has the voting strip painted on his left index finger. Whatever they use does not come off easily. See Laying Low for the Election.

Tomorrow (May 16) is election day in Tamil Nadu (where I am staying). The Chief Minister and the Legislative Assembly will be voted on. You can read more here.

J Jayalalithaa is the incumbent Chief Minister. She is a former actress and has served as prime minister of Tamil Nadu for a number of years (from 1991 to 1996, in 2001, from 2002 to 2006, and from 2011 to present, according to Wikipedia). I actually saw here drive by in a motorcade in February.

Since the poll date was announced several months ago, all billboards and walls painted with Jayalalithaa’s face and popular name “amma” (mother), had to be painted over (they were everywhere). In addition, one could not carry more than 50,000 rupees (about $760) without having proof of origin (e.g. ATM slips, etc). This was supposed to cut down on the buying of votes. As a part of this, police stops were increased (our vehicle has been stopped twice).

In order to curry favor with the voters, Jayalalithaa has provided bicycles and laptops to all students (i.e. the new voters), as has given a fan, a grinder and a food mixer to all those who qualify for that level of rations (there are different ration/id cards based on one’s annual income).

My landlord told me that often these “gifts” are usually not as nice as they may seem, as the companies who supply them don’t provide as high a quality of good as promised and often they are DOA.

As tomorrow is the polling date, I have been told by the head of the BELC and also by my driver that I should not leave my apartment. Rival parties have been known to get into scuffles and even throw rocks at one other.

The results will be announced this Thursday, May 19. My driver told me that I should especially stay inside on that day, as the loosing party supporters often express their displeasure after the results are announced.

Please pray for the government leaders of India, and the states of
Andhra Pradesh and Tamil Nadu, that they will continue to allow the work here to be done unhindered so that the pastors and members of the BELC and CLCI can share the good news of the salvation we have through Jesus Christ.

Update: When you vote in India, they mark your right index finger with ink to show that you have voted (and so you can’t vote more than once. That explains all the signs I’ve seen with a line on that finger, or a miniature image of India or Tamil Nadu. Martin, my Telugu tutor was just here and explained the mark on his finger, as he voted earlier today