Since the demonetization of the 500 and 1000 rupee note, cash is scarce. The ATMs here usually say “24 Hours ATM”. They need to clarify that as most are closed 24 hours, not open.

This cash crunch has taken a toll on most Indians, who conduct most transactions in cash. Because no one has any cash, the toll roads have stopped collecting any tolls.

A toll plaza (back when it was collecting tolls)

Initially it was only until Nov. 20 that tolls would not be collected, but that has extended until tomorrow, Nov 24th, as the situation has not improved.

It has been nice being able to whiz through the toll plazas without having to wait in line and pay. It remains to be seen if the tolls will actually resume tomorrow or not. Tomorrow is also supposed to mark the raising of bank counter cash and ATM withdrawal limits. I don’t see how the limit can be raised as most people can’t even get to an ATM.

Nov 25 UPDATE: The tolls have been suspended through Dec. 2. From midnight on they will be collecting tolls and you will be able to pay with the old 500 notes and get change (but not the old 1000 notes).  Also India has suspended the ability to exchange notes at banks (so no more inking of fingers, see below), but one can still deposits old notes through Dec 30.

The paper last week had some good cartoons on the situation I thought I would share: 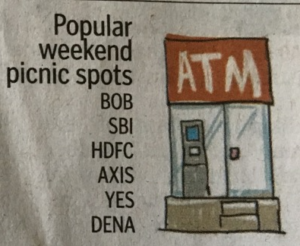 Those are all bank name acronyms

The government started requiring that anyone exchanging money have their finger marked with permanent ink (like they do here when you vote so you cannot vote more than once). This  move is to limit each person to one exchange of up to 4000 rupees ($60) and prevent someone from slowly exchanging a large hoard of cash by going to multiple banks multiple times. By marking the families finger, the thief prevented anyone in the family from exchanging any of their money.

The above is a rather light-heard look at this situation, but the reality is that the demonetization has taken a heavy toll on many people here. For example, I just read an article (which led me to add this postscript) about an 18 year old who committed suicide yesterday because he could not get enough money to pay for his school exams.  That same article noted that over 50 people have lost their lives so far (not all from suicide). Please pray for the people in India that God would preserve them during this difficult time and bring them to the knowledge of Jesus their Savior who gives us hope for the future and for eternal life.